The power of purging

We are surrounded by so much “stuff” in our lives and that clutter may be standing in the way of goals we’ve set for ourselves this year.

If peace of mind and smaller-sized jeans are your hopes for the future, January is your month to begin not only a diet, but also a “purge” of many of the unnecessary items that surround you.

“Losing weight and getting organized go hand in hand,” said Betty Huotari, a professional organizer and owner of Logical Placement, LLC in Fenton.

Whether you need to lose weight or not, both disciplines require many of the same skill sets: motivation, determination, will power and a willingness to make changes.

Tracy Boettcher of Fenton Township didn’t wait until the new year to begin her plan to downsize. She took down holiday décor on Christmas Day and immediately began purging closets, pantries and drawers.

“I’m actually thinking of downsizing into a smaller home in downtown Fenton,” she said. “I won’t need half the stuff I have. I got rid of a lot of coats, shoes and clothes. Instead of keeping old cans of paint, I’m just keeping paint swatches.”

She’s giving all her donations to Catholic Charities of Shiawassee and Genesee counties, where people can come in and take clothes they need. “Fenton Rotary takes a vanload the first Tuesday of every month,” she said. “That’s my new thing.”

Anna Handley of Fenton is also de-cluttering at home, motivated by trying to rid herself of all the stuff she feels weighs her down.

She has started by getting rid of furniture she no longer has use for, and going through boxes, closets, the basement and garage. She’s going through each room, each closet, piece by piece. “I’ve had to decide what I actually use and why I have an attachment to this ‘stuff,’” she said.

The items she struggles with are collectibles, like an old stamp collection and an old slide viewer.  “We think they have some awesome value, when it fact, they aren’t worth much,” said Handley. “Something is only worth what someone will pay, and you have to find the right someone. I’ve been dragging my stamp collection around since I was 11 years old.”

Herman Ferguson is also clearing clutter from his Tyrone Township home, including old paperwork and closets. “My kids are worried that I would end up leaving the job to them,” he said.

He’s listening to this advice from his daughter, Crystal Hiler: If you hold something for one minute and you don’t get any feeling from it, then get rid of it.

Huotari believes that making a whole houseful of decisions at once can be overwhelming, so she advises people to break organizational goals into manageable steps.

“Have a project a month,” she said. “Say to yourself, ‘I’m going to work on the garage the first Saturday of the month, then schedule it on your calendar and keep it like you would an appointment. Have water and snacks on hand, and set a timer to keep you on task.”

Huotari will be teaching her organizational skills at a special seminar, “How to attack your kitchen pantry and cupboards” at the Grand Blanc-McFarlen Library on Thursday, Jan. 12 at 6:30 p.m. “We’ll also work on junk drawers and all that Tupperware,” she said. 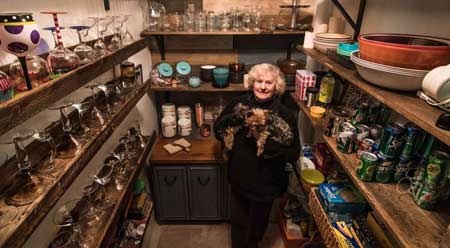